Sakura (cherry blossoms) have a long history in Toronto, and an even longer history in Japan. Click on a link below, or scroll down to learn more!


History of Sakura in High Park

High Park was not always home to the thousands of sakura trees we see today. The trees that have been planted throughout the park and the city of Toronto hold a unique history, and the Japanese Canadian community has played an important role in creating spaces for sakura to thrive.

The first trees were planted in 1959, an event made possible by the tremendous efforts of issei (first generation) Japanese Canadian leaders and community members. The sakura planting campaign was formed by Consulate-General Yoshida, who invited community leaders to fundraise $20 000, with the vision of building a “Japanese garden” in a public park in Toronto. The Nikkei (Japanese diaspora) community was small at the time and faced discrimination in post-war Toronto. Thus, this was a “dream-come-true” project for the community.

The fundraising was successful and in April 1959, the Japanese ambassador to Canada, Toru-Hagiwara, presented 2000 Somei-yoshino sakura trees to the citizens of Toronto on behalf of the citizens of Tokyo. The trees were planted in appreciation of Toronto accepting re-located Japanese-Canadians following the Second World War. Many of the trees were planted in High Park, on the hillside overlooking Grenadier Pond (southwest of the Grenadier Café) and around the east shore of the pond. 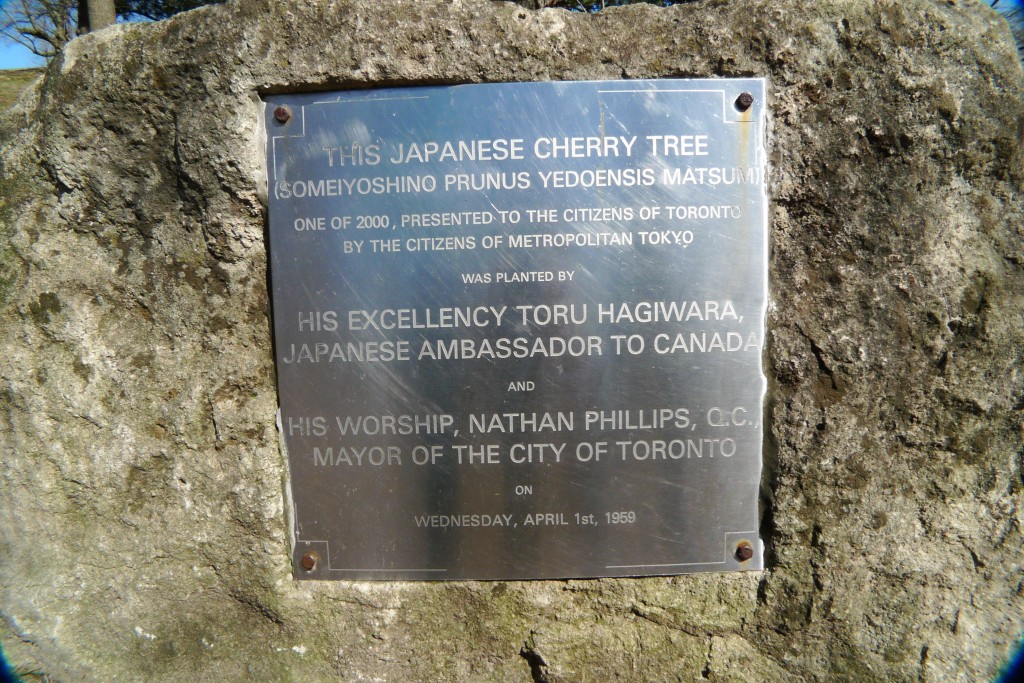 In 1984, an additional small grove of Japanese sakura trees was planted along a pathway west of the Children’s Adventure Playground in High Park (near the Zoo parking lot). The trees were donated by Yoriki and Midori Iwasaki as a special gift to the people of Toronto and “a joyful symbol of life”. 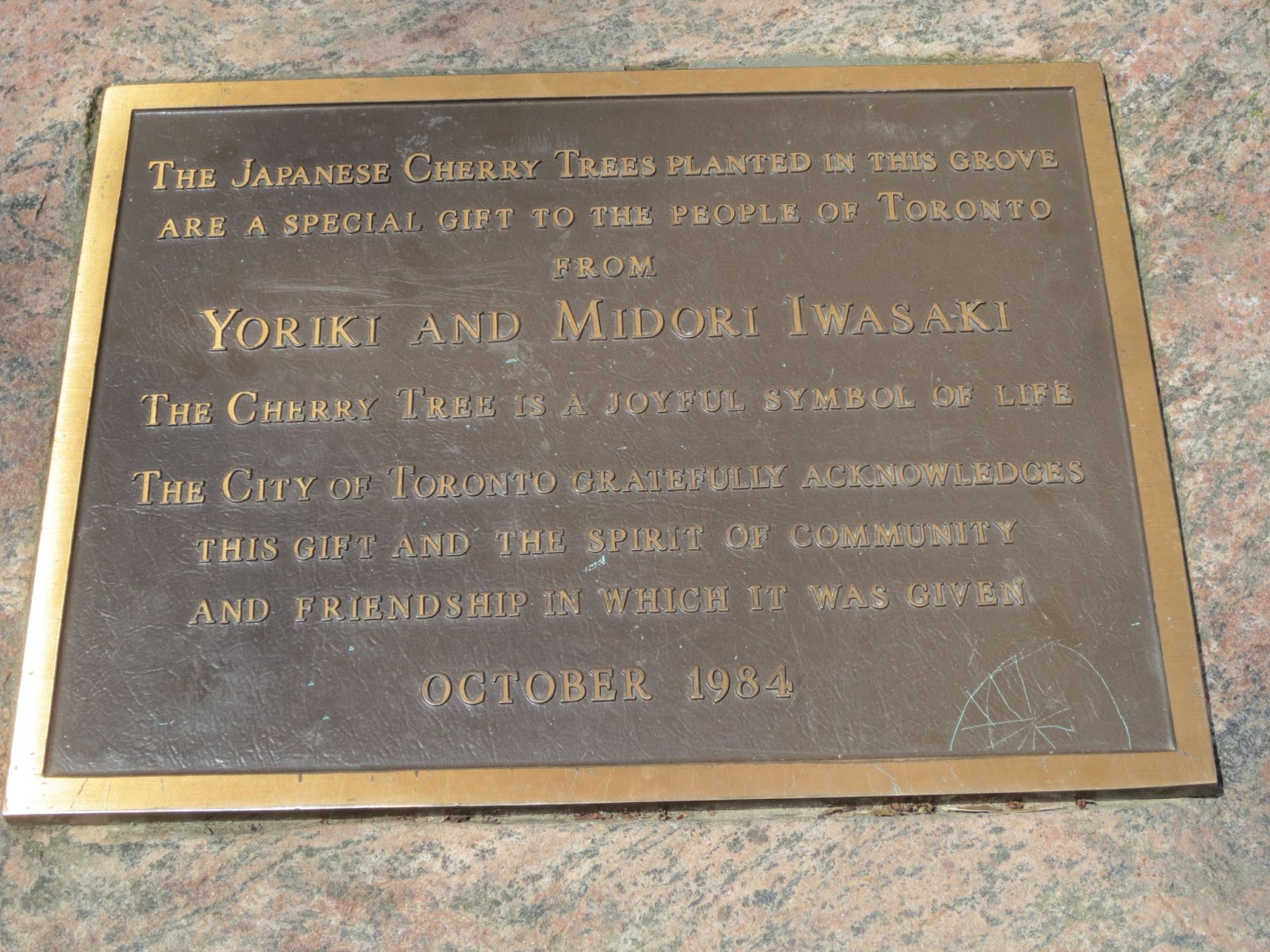 The most recent sakura tree planting project was organized in the year 2000 by Consulate-General Hara, as some of the original trees were dying. Japanese community organizations and companies came together to initiate a ten-year Sakura Project, with the mission to plant 3000 sakura trees across Ontario. The purposes of the project were: 1) to inspire greater friendship and understanding toward Japan among Canadians; and 2) to contribute to promoting friendship and goodwill between Japan and Canada.

Through this project, 34 Yoshino ‘Akebono’ and Kwanzan ‘Fugenzo’ sakura trees were donated to High Park in 2001 and planted on the east shore of Grenadier Pond near the Maple Leaf garden. In 2006, 16 additional Yoshino sakura trees were planted near the original 1959 planting sites. It should be acknowledged that the collective efforts of the Japanese Canadian community were crucial to the success of these major tree planting events.

Sakura is the Japanese name for flowering cherry trees and their flowers – often referred to as cherry blossoms. In Japan there is a legend that each spring a fairy maiden hovers low in the warm sky, wakening the sleeping cherry trees to life with her delicate breath. 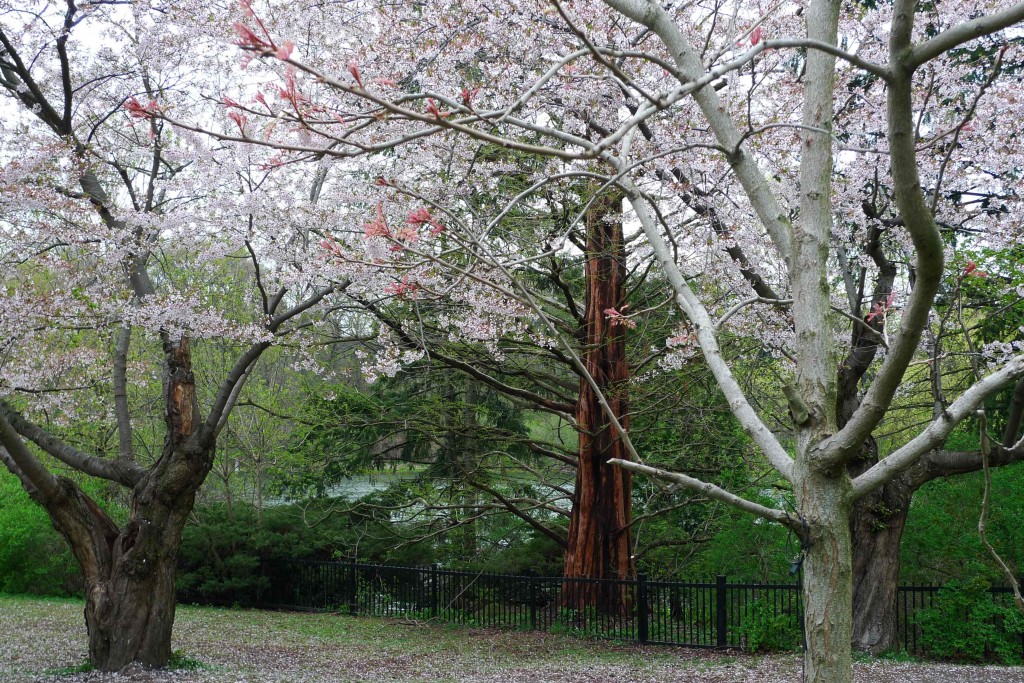 Sakura trees are the first to bloom, with flowers that are nearly pure white with a hint of pink near the stem. The blossoms last for about a week, blooming before the leaves flush out. Due to their very short bloom time, Sakura blossoms are seen as a metaphor for life itself, luminous and beautiful, yet fleeting and ephemeral.

The Japanese traditional custom of hanami or “flower viewing” dates back to the Nara Period (710-794) when the Chinese Tang Dynasty influenced Japan with their custom of enjoying flowers. Ume (Japanese apricot) blossoms were admired by most during this period, but by the Heian Period (794-1191) cherry trees attracted more attention and were planted and cultivated for their beauty, especially in Kyoto (Japan’s capital city during this era). The custom of hanami was originally limited to the elite and Japanese nobility but soon spread to samurai society and then blossomed to include all levels of Japanese society. 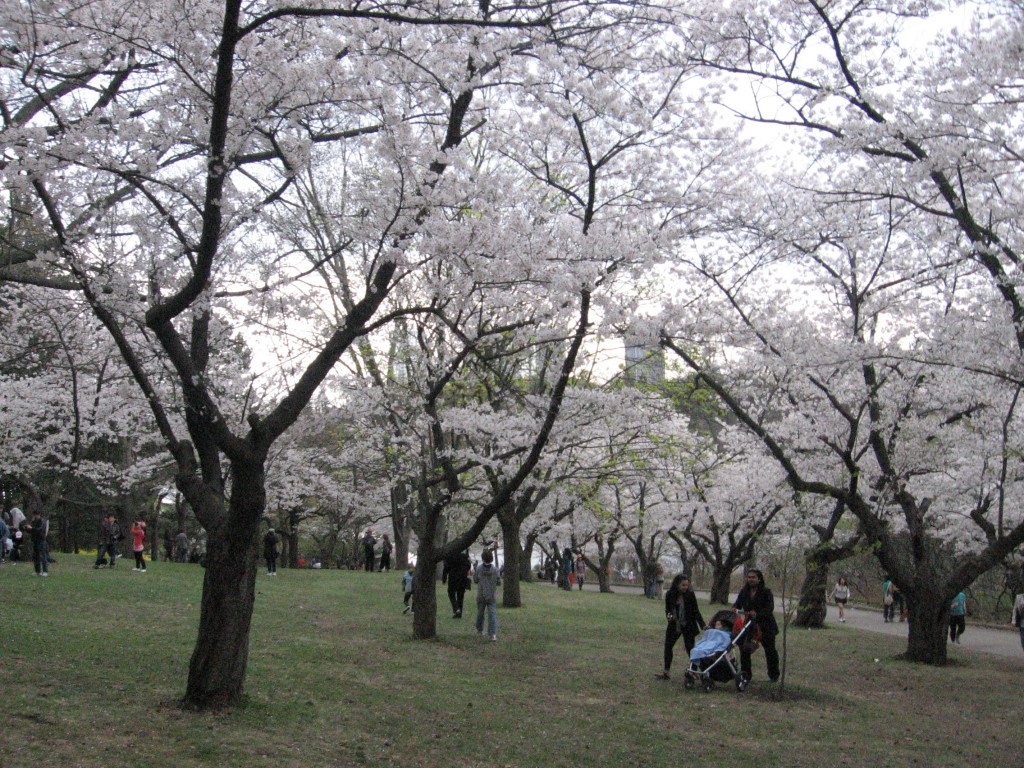 To this day, when the Sakura trees bloom, Japanese people continue the tradition of hanami, gathering in great numbers during the day or evening to hold feasts and drink sake under the flowering trees. In fact, this enjoyment has spread to other cultures and many cultures enjoy viewing the cherry blossoms when they are in bloom. Many people also take part in processional walks through parks, contemplating and renewing their spirits under the Sakura trees. Hanami at night is called yozakura (meaning “night sakura”). In many places, paper lanterns are hung under trees for yozakura.

The Japanese Meteorogical Agency provides daily reports on the “sakura zensen” (cherry blossom front) as warmer weather moves up the island. Blossoming begins in Okinawa in January and reaches Tokyo by the end of March or beginning of April.

These trees are cultivars or plants that have been selected and bred for desirable characteristics and are maintained through cultivation. Different cultivars not only look different, but will respond to weather and the environment differently. This means they may bloom at different times, with one peaking then fading while the next bursts into flower.

Also known as the Tokyo cherry, Yoshino cherry trees are the most common flowering tree in Japan. This was the first cultivar of sakura trees planted in North America. The flowers are white and fade to pink as the petals start to fall. They have almost no scent and a star shape in the centre. 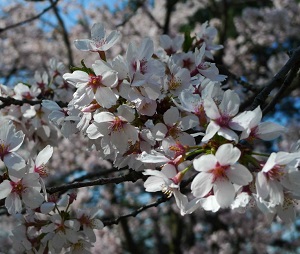 The Akebono cherry is a cultivar variety of the Yoshino cherries created in 1920 in San Jose, Callifornia. It is the most common sakura tree planted in the Pacific Northwest region of North America. The tree is very similar to the Yoshino trees, but the petals are brighter and the pink fades to white before the petals fall. 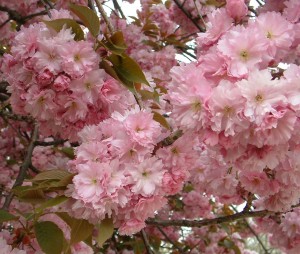 In Japan, Prunus serrulata trees are often refered to as sato-zakura, or village cherries. They have been bred and cultivated for so long (possibly centuries) that their origins are completely unknown. These flowers are pink and frilly.

Though they are not native to Canada, these trees have incredible wildlife value, and benefit the ecosystem of High Park. The small fruits of the Yoshino and Akebono cherry trees are a source of food for small mammals, and many resident songbirds including American Robins and Northern Cardinals. Baltimore Orioles that have just migrated back to High Park in early May are often seen feeding on nectar from the Sakura blossoms.

In addition, these beautiful trees increase the canopy cover of the park. More trees in our cities help reduce our carbon footprint by storing carbon and creating more oxygen for us to breathe. They also clean the air, soil and water by absorbing pollutants like carbon monoxide, sulfur dioxide, and nitrogen dioxide. They also provide a living space for small mammals and insects.

Other Sakura Sites in Toronto and Beyond

Thanks to the “Sakura Project”, many other sites in Toronto are graced by these beautiful trees, including the CNE, Trinity Bellwoods Park and the University of Toronto’s main and Scarborough campuses. Outside of Toronto, blossoms can be viewed at McMaster University and the Royal Botanical Gardens in Burlington. Cherry blossom viewing is a rite of spring in many cities across North America, where Sakura Matsuri (matsuri means “festival”) are held to celebrate the beauty of the Sakura trees.

For more information on High Park's varieties of Sakura trees:

More information on cherry blossoms in Toronto and other cities:

Japanese Consulate and the Sakura Project