Donate Now
About
Experiences
What's On
Get Involved
Employment
Resources

Back to the Blog
Weekly Wisdom: What is Autumn Equinox?
September 22, 2022 by High Park Nature Centre

Welcome to Weekly Wisdom! Stay tuned for some fun nature facts to amp up your nature knowledge!

Equinoxes occur twice a year, once in the fall and once in the spring. The earth is tilted neither toward nor away from the sun and positioned directly above the equator. This position ensures a roughly equal amount of sunlight across both the northern and southern hemispheres and roughly equal lengths of daylight and darkness.

Autumn or autumnal equinox occurs around this time in September each year signaling the start of fall. At the equinoxes, the sun rises almost exactly due east and sets due west. Following autumn equinox, the position of sunrise moves from the northeast direction to the southeast (it's the opposite following the spring or vernal equinox). As we head towards the winter months the earth's northern hemisphere becomes more tilted away from the sun resulting in lesser sunlight and colder weather up north. With the southern hemisphere titled more towards the sun, warmer weather sets in the southern hemisphere and it heads towards the summer season.

The word equinox stems from the Latin term aequinoctium with the words aequus meaning equal and nox meaning night. While equinoxes represent the days with equal daylight and darkness, they aren't exactly equal due to atmospheric refraction among other things. The exact day when we experience equal lengths of days and nights is called equilux. Autumn equilux occurs a few days after the equinox and vernal equilux occurs a few days before. 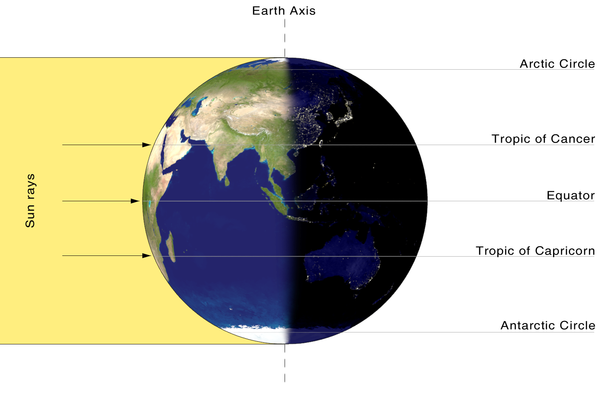 While the length of day and night are roughly equal almost everywhere on earth, the poles experience the equinoxes quite differently. Following autumn equinox in the northern hemisphere the sun dips below the horizon. This does not necessarily mean that the north pole experiences total darkness for months on end almost immediately. Instead, it enters a twilight period where there's still sunlight despite the sun not being in sight. Places near the north pole experience total darkness closer to sometime in October, reaching peak darkness on winter solstice, with dawn occurring a few weeks before the vernal equinox.

Get your jackets out and celebrate this awesome season and all the changes to the landscape it brings with it.

Fall equinox arrives at around 9:03PM ET on Thursday, September 22, in the Northern Hemisphere.