Donate Now
About
Experiences
What's On
Get Involved
Employment
Resources

Back to the Blog
Word of the Week: Flyways
April 08, 2022 by High Park Nature Centre

Welcome to Word of the Week! Stay tuned for a new word each week to amp up your nature vocabulary!

The word of the week is flyways [FLAI-WAYZ] (noun): General flight path used by large numbers of birds while migrating between their breeding and overwintering grounds.

Much like airplanes have generally fixed flight paths when traversing between two locations, so do migratory birds! These flyways delineate the main highways used by migratory birds that correspond to major geographic features, which have an appropriate north-south alignment, like coastlines, the Rocky Mountains, the Great Plains etc.

In North America, there are four major flyways: the Pacific, Central, Mississippi and Atlantic Flyways. Breeding location, flight speed, distance of travel and preferred habitats are all factors that contribute to routes taken by the various migratory bird species. 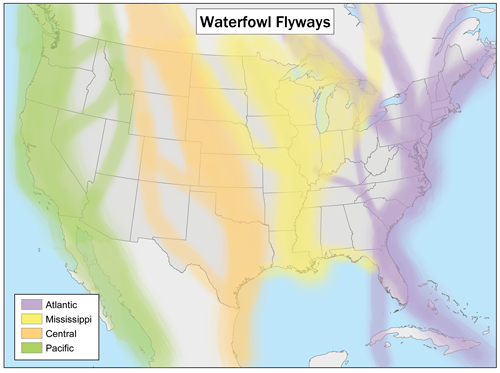 Toronto is located where the Atlantic and Mississippi Flyways converge, making for an ideal bird viewing experience as the city welcomes around 50 million migrating birds in the spring! Most birds traveling through Toronto in spring are heading north to the Arctic and Boreal Forest regions. However, there is considerable variation in the destinations of individuals of the same species. Some birds of the same species might be destined for locations as far apart as Quebec and Saskatchewan.

Interested in welcoming migratory birds on their srping stopover in Toronto? Sign up for Dawn Chorus, our annual event where we flock to High Park at the crack of dawn on International Dawn Chorus Day to experience the magic of bird song as 50 million migrating birds return to Toronto. You can also learn more about birds in Toronto by signing up for our birds in the city online naturalist course!